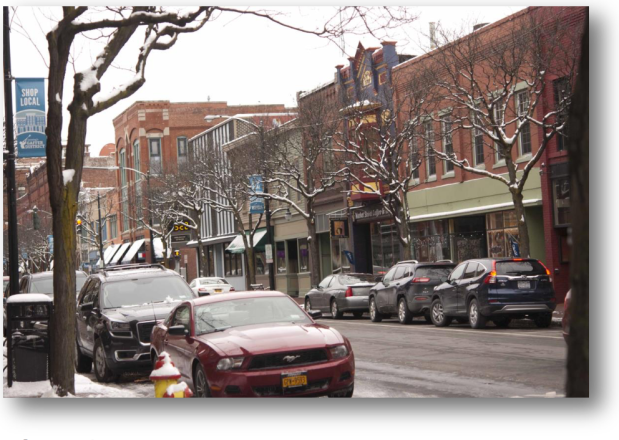 When looking for examples of towns that get the concept of delivering a quality experience, look no further than Corning, New York.

A group of Canadians on a business study tour last spring learned about the town’s sincere commitment to excellence, and their determination to collaborate.

Key observations in Corning was the philosophy that “Collaboration is everything – there is no them, there is only us”.  That’s what Coleen Fabrizi, Executive Director of the Gaffer District, told the group, adding that tapping into local business resources is crucial.

Keeping the downtown vibrant means putting the resources behind it, including 11 staff, with merchandising designers among them. The majority of funding for the Gaffer District comes from private-sector corporate investment, primarily from the city’s largest employer.

The town hosts the world headquarters of Corning, Inc., which employs 5,100 workers in the region and 35,000 worldwide. Annual sales for Corning, Inc. are approximately $10 billion. The company no longer makes cookware and now specializes in advanced optics and glass applications for aerospace, defence, pharmaceutical and consumer applications.

The town is also home to the Corning Museum of Glass, which employs 130 staff and recently completed a $64-million expansion. There were 460,000 museum visitors in 2015 providing $4.1 million in admission revenue. More than 60,000 visitors participate annually in Make Your Own Glass Experiences at the museum, generating another $1.5 million in revenue.

The Gaffer District of Corning is the operating name of the “Corning Intown District Management Corporation, Inc.”, a downtown business improvement area in the City of Corning, New York (population 6,500).

“Developing more networks within the community is important,” observed one of the participants. “Upselling our community rather than downplaying what we have to offer, because things will change with time.”

The Canadians were touring the Finger Lakes region of New York State, gathering ideas and insights to consider using in their similar region of Southwest Ontario, Norfolk County.